Illegal immigration has been a heated social topic for many years. This film explores immigration and accurately portrays the life of an undocumented person in the United States. Again, I find myself deeply connected to a movie. I’m the daughter of an undocumented immigrant, my mother, and my father, who was a resident (both born in Mexico). I witnessed firsthand my mother’s struggle. She’d go to work fearing deportation and separation from her only child (yes I’m an only child). My mother experienced many difficulties, similar to the ones portrayed in this film. I wish my mother were still alive so I can thank her for everything she sacrificed to provide me with a better life.

The movie begins with Rosario (Kate Del Castillo), who resides in Los Angeles, waking up. She gets ready to call her son, Carlos (Adrian Alonso), who lives in Mexico with his grandmother (Rosario’s mother). Every Sunday she calls him at 10am, and even though they’ve been separated for 4 years, their bond remains strong. During their phonecall, Carlos insists he’s ready to cross the border to be with her, but Rosario knows the dangers and assures him they will soon reunite. Rosario works multiple jobs doing housecleaning work so she can make enough money to send to Carlitos. It’s Carlitos’ 9th birthday, and he has a big pinata for his party (along with other presents). A joyful day quickly turns sour when distant relatives pay him a visit attempting to gain custody of him (after finding out how much money Rosario sends monthly). The grandmother gets rid of them, but before they leave, they tell Carlos of his father’s identity. Carlitos has a side job where he assists Carmen (Carmen Salinas), who is in charge of preparing Mexican immigrants to cross to the United States (illegally). Carlitos has been saving all his earnings for the opportune time. Monday morning, Carlos’ grandmother passes away in her sleep, so he decides to go on a journey to reunite with his mother.

Along his way, he encounters several people who want to help him (either for money, or a simple favor), but fail to do so, and Carlos is once again in a tough situation. The rest of this film follows Carlos’ journey to Los Angeles. This film accurately portrays a day in an undocumented immigrant. The fear of being deported causes constant awareness of surroundings (police officers) in public places as well as in the workplace. The jobs worked by immigrants are low paid so many rely on rides or public transportation to get to their destination.

My father would listen to “El Cucuy de la Manana,” a radio personality in Los Angeles. I recall waking up every Saturday morning to Los Tigres Del Norte, a Mexican Norteno group, indicating cleaning time. So, to hear and see these two in this film filled me with nostalgia. Additionally, many of the locations where this film was shot (Los Angeles) are familiar. There is always a sense of pride and joy when your hometown is in a movie. When Enrique (Eugenio Derbez) is introduced in the film, he brings comedic relief providing levity. Carlos and Enrique have my favorite sequence in this movie. They both are hired to work in a restaurant, washing the dishes, and they both begin singing (which soon develops into yelling) to each other.

The acting is excellent particularly Adrian Alonso as Carlos. Overall I enjoyed this movie for its message and nostalgia. The love a mother has for her child (or children) knows no limits. The same can be said for the love a child feels for its mother/father. Carlos decided to face the dangers of immigration so he can be with his mother.

This film fulfills 3 projects I’m currently working on. Hispanic Heritage Month is now underway, and this was a film requested for review. 52 films by women is a challenge I accepted where I watch one female-directed movie a week. Lastly, this film is directed by Patricia Riggen, a Mexican director who has been the only Latinx/Hispanic female director in the last 12 years to direct a movie. I will be posting this brief review on the site “In Their Own League,” which focuses on women in the film industry. Hope you can watch this film if you do, please let me know your thoughts. 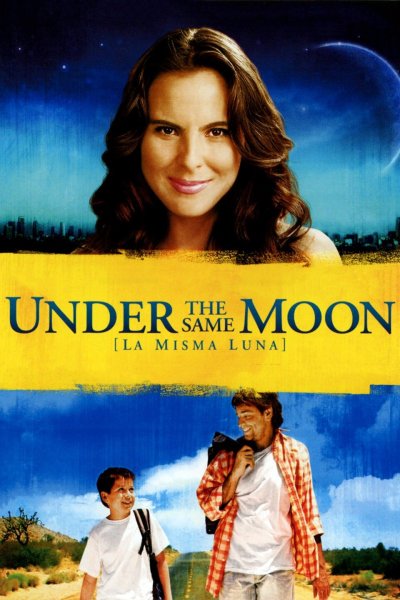