It’s no secret that “Harley Quinn: Birds of Prey” has been a movie that’s been heavily criticized and beloved simultaneously. It’s a divisive film that many have called it the feminist Harley Quinn, and others have praised and admire the absence of the male gaze.

Let me start off by stating that after seeing this film, I can confidently say that Margot Robbie will be synonymous with Harley Quinn, the same way Hugh Jackman is to Logan and RDJ is Tony Stark. I enjoy her approach and portrayal of this character, and needless to say, she is phenomenal in this movie. Granted, I have not read any of the comic books, and I’ve only seen some of the episodes of Batman, so I’m not entirely sure how accurate the comics this film is. I thoroughly enjoyed the style of this movie from the custom design to the production design. The story was a decent one. My favorite character in this movie is without a doubt Black Canary! I walked out of the screening ready to watch her solo film. Also, Ewan McGregor holds his own in this film. The R rating on this movie made it more appealing, and the fight scenes were well choreographed. As a Latinx woman, it was nice to see someone like myself in a big-budget film like this one. Also, the diversity in this film is a breath of fresh air.

Although I thought the story was a decent one, I did have some issues with it. The film came across as a montage of incoherent scenes. It felt that they were scenes from different movies, and they tried to make them into one. Another issue I had is getting some character background on some of the characters, but not all of them.

I’m one of those who appreciated the absence of the male gaze. It was refreshing to watch Harley Quinn in a movie where her butt cheeks weren’t showing. She looked like a badass without having to be objectified. I enjoyed watching Harley moving on from her break up and being her own person without having a partner (or partner’s protection). It’s movies like these that symbolize why it’s essential to have women direct female-centric films. I’m aware that a movie is a movie regardless of who directs it, but please tell me there isn’t a difference between Harley Quinn in “Birds of Prey” and “Suicide Squad.” The same comparison can be made with the Amazons in “Wonder Woman” and in “Justice League.” It’s noticeable in small details like Harley handing over a hair tie to Black Canary during a fight scene to witnessing Harley dealing with her break up in her apartment.

I entirely understand why many may be bothered or even annoyed by many of us being vocal about female directors and allowing them to tell stories. But I do believe that we’ve seen enough women portrayals from the male gaze. It’s time to see films from other directors that aren’t white men. With that out of the way. Overall, “Harley Quinn: Birds of Prey” is a movie with some fantastic fight scenes and some stylish costumes that will leave you craving a breakfast sandwich. 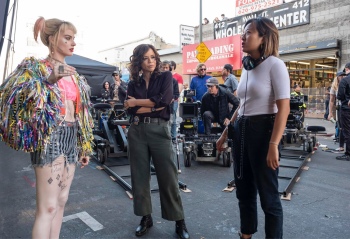